The Happy Liver Society raises funds to support Stacey House by hosting various events throughout the year, from fun family picnics to annual galas. In addition to fundraising, the Happy Liver Society is also committed to educating the public about liver health and the prevention, diagnosis and treatment of all forms of liver disease.

Join us at our first Happy Liver Society...
​Presenting a Christmas to Remember Event! 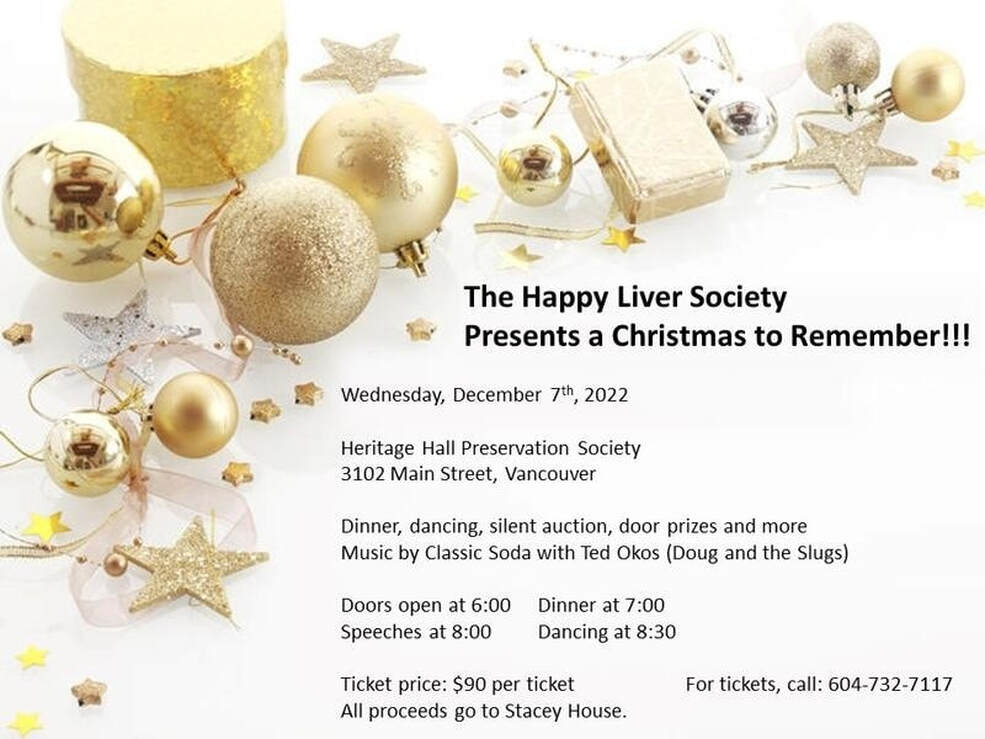 We are doing a VIRTUAL DRAW with dozens of PRIZES!!!

All proceeds will go to the Happy Liver Society, BC Gaming Raffle License #126782

A little photo gallery of past events... 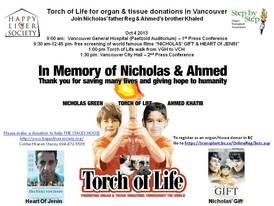 TORCH OF LIFE VANCOUVER
October 04, 2013
In Memory of Nicholas & Ahmed

In Memory of Nicholas & Ahmed Continuing to inspire the public as organ & tissue donors and helping The Stacey House for Post Operative Organ Recipients Two of the world’s most famous organ donor children will be reunited once again with the Torch Of Life in Vancouver, British Columbia on October 4, 2013. Young Nicholas Green & Ahmed Khatib both died by bullets and their families inspired the world by donating their organs. Nicholas’s father Reg Green & Ahmed’s brother Khaled Khatib will share their stories and carry the Torch Of Life together. Two world acclaimed films were produced following their respective tragedies; (Nicholas’s Gift & Heart of Jenin) will be shown together for the first time as part of the day’s activities. About Nicholas Green On October 1,1994, Seven-year-old Nicholas, was shot by masked men in southern Italy in an attempted robbery as the Green family drove along the main highway towards Sicily. Nicholas’ organs and corneas went to seven Italians, four of them teenagers.

Since then organ donation rates in Italy have quadrupled, so that thousands of people are alive who would have died. Maggie Green, the mother, when asked by a reporter, what she would tell the killers, replied “When they see what they have done, I hope they will turn away from this kind of life. ” Famed Italian TV host Maurizio Costanza, said “Today we learned a lesson in civility.” About Ahmed Khatib On November 3, 2005 in Jenin Palestine twelve-year-old , Ahmed, was shot by an Israeli soldier who thought he had a gun. The Khatib family donated the boy’s organs to six Israeli children. Many people in the world were inspired, including world leaders & celebrities. Later the Ahmed Khatib Center for Peace in Jenin was built to provide children in the camp with an alternative to life on the streets. Ahmed’s brother Khaled recently carried the Torch Of Life in Ontario for double lung recipient Helene Campbell About Torch Of Life On September 5, 2001 in Vatican City, Pope John Paul 2, blessed the Torch Of Life as liver recipient George Marcello passed it to him. Mr Marcello was walking, 12,000 kilometers across Canada, carrying the Torch to bring awareness for organ & tissue donations.

Contact Karen Stacey 604-872-5509 or to register as an organ/tissue, please go to www.transplant.bc.ca/OnlineReg/bcts.asp